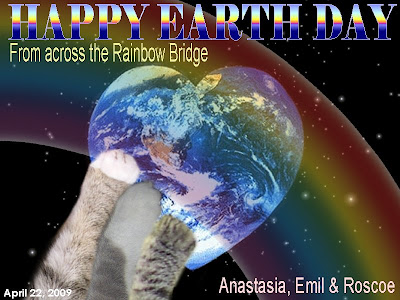 picture by Opus
Posted by The Cat Realm at 10:11 AM No comments:

I think Miss Peach created this meme, and though we never got tagged for it specifically, I really want to do a version of it about Anastasia's Box of Live: It is her permanent shrine which we created after 30 days of mourning at her altar: and it now stands under the window, by the tiger named Lilly, who she was never afraid of: Here you can see it at it's permanent place, and you already saw it in one of the pictures from our Secret Paw post: This is a close up of it, it has a star on top because Anastasia now is a star. And the sun. And we all know she is cat enough to do both jobs!!! There are windows for six pictures and the whole box turns around on it's base. And there are many many things inside! Some of her favorite toys. Some dried shrimp. The poem I wrote. Monte's picture. More pictures of herself. One of the booklets she wrote with me. Gifts from other cats. Anastasia we miss you sooo much.
We will ALWAYS love you!
Karl, the maid and the butler

Labels: anastasia we love you This would have been Anastasia's entry for the Halloween contest. She actually created it in July for a Fashion Friday but then realized that it was better suited for Halloween. So it was never published...
I used it as a blueprint for some T-shirts.
Remember: This Friday, November 2, I will put up her last "I Dare You All" on The Cat Realm blog.
Karl

Pretty much the only video clip we have of her

A Poem For Anastasia

There is a hole in my life.
It hovers and crouches
and then it swallows me up.

There is a hole in my life.
It burns and screams
and then it beats me down.

There is a hole in my life
which strangles my heart
as I try to fill it with
memories of you.

There is a hole in my life
which rips me apart.
Posted by The Cat Realm at 6:27 PM 7 comments:

She seems to be reaching out from across the bridge! She discovered that Oscar couldn't be stopped by something like crossing the bridge and decided that if HE can't be stopped CERTAINLY SHE won't be!
So you might still find her comments once in a while, from across, if she's not too busy running around in the sunshine or drinking niptinis....
Karl

And I will add more of her story every once in a while too.
Posted by The Cat Realm at 11:29 AM 17 comments:

At the base of a desert hill on the West side of lives a nice lady who feeds the feral cats who show up around her barn. One day a little kitten showed up with the bunch – clearly no one of the other cats was her mother, and there weren’t any siblings either.

The food was put out on a table and the little thing just barely reached the corner of it with her claws and pulled herself up with all her might to eat.

The lady decided to trap the kitten and have her spayed and brought to the animal shelter for adoption.

The evening after she was caught it happened that my butler was over there for dinner and saw the little kitten sitting in the large trap, looking really pitiful.

He took her out and gave her some food – which she gulped down – and wrapped her in a piece of cloth and she started purring and purring. So he decided to take her home and raise her and look for a home for her.

That is how I met Anastasia. He brought her in and sat her on the bed and I just stared at her incredulously. But she was so small, and helpless, and needy, I couldn’t resist – I went over and started cleaning her – and we just instantly connected. This was in early December of 2004.

She was just a human handful of bones and skin, and a big belly full of worms, which she freely shared with all of us…

For the next weeks the staff never got to see her except when I was around. She would hide behind shelves, or under the bathtub, or under the bed until I came in and called for her and then she would come out and I would clean her, and snuggle with her, and play with her.

A bit later, when the staff actually saw her move from one place to another they joked that she had no legs – she would always run fast and crouched down almost on her belly… But when they caught her sleeping somewhere and petted her she would purr very loudly – after of course first hissing at them!

She would always watch my every move and learned everything from copying me. For weeks she would sit in the morning and watch the maid and me play with the string toy. Just sit and watch.

And then one morning she would come and join and ever since I couldn’t play anymore because she would cut in… but I didn’t care, I just let her.

On a Tuesday evening at 9 pm late January 2005 we were playing around when all of a sudden she would behave strangely: She’d roll around in front of me, and meow like I had never heard her meow before, and then lay and put up her behind and look at me over the shoulder… I felt like I needed to step over her and bite her on the neck but then what? It was the weirdest thing! I realized that the very next morning the maid made a call to the vet – and Anastasia was gone for a couple of hours and when she came back she had a shaved belly with some stitches on it and I guess she had her “cut –remove-and stitch” ritual, as she called it.

It must have hurt but she played and jumped and wrestled like nothing had happened. That’s how tough she was!

A while after that she when she was almost full grown she was allowed to join me in coming outside and I showed her around the neighborhood. She would follow me most of the time but when I went on my long hunts she’d stay close to the house. She would never go far, but she would also never allow anybody to get close to her, ever! It took almost two years before she let the maid or the butler sometimes touch her outside. And only when she felt like it, mostly she would run away if approached. But the distances would get shorter until you actually could not call it running away anymore but teasing!

She was a good hunter, very fast! She loved to eat spiders, and moth, and cycads. And play with butterflies. And while I was going for rats and little rabbits, she would go for the smaller kangaroo rats and mice. Eat them up top to bottom with no waste! One day the maid heard the crunching of bones and went to see what Anastasia was eating. And she was just munching on the behind of a kangaroo rat, swallowed it up and all that was left on the ground was the tail. And then she would pick that up too and slurp it down as if it was a piece of spaghetti!

She was a very funny cat! Always made everybody laugh with her haughty attitude and stubborn independence.

Labels: we will always love you
Home
Subscribe to: Posts (Atom) More pictures will be added constantly!

HER AWARDS AND OTHER STUFF